The time has come to celebrate Halloween. Let’s travel back in time to a time of knights and princesses and dragons in the fabled land of…. Lancaster. That’s right Lancaster, PA, home to the one and only Dutch Wonderland. A great kids theme park that is fun for kids and parents alike. So, put on your costume, grab your trick or treat bag, and let’s join our friend Duke the Dragon to celebrate Halloween at Dutch Wonderland. Here is what we thought of our day there.

Dutch Wonderland is a nice park. The space it takes up is pretty large, so you don’t feel crowded or cramped. While some of the stuff in the park may seem a little older, everything works together and fits in with the “Medieval” theme they have going. For Halloween though, this quaint park gets transformed into a Halloween extravaganza. Everywhere you turn, there are decorations, lights, and sounds. There are spider webs, hidden skeletons, pumpkins, Halloween music, and even costumes on the dinosaurs. The other aspect that makes the decorations more fun is there are little hidden gems throughout the park. This means you need to keep your eyes peeled as you never know when you might spot a skeleton hanging out eating dinner or peering out a window at you. Rating: 5 out of 5 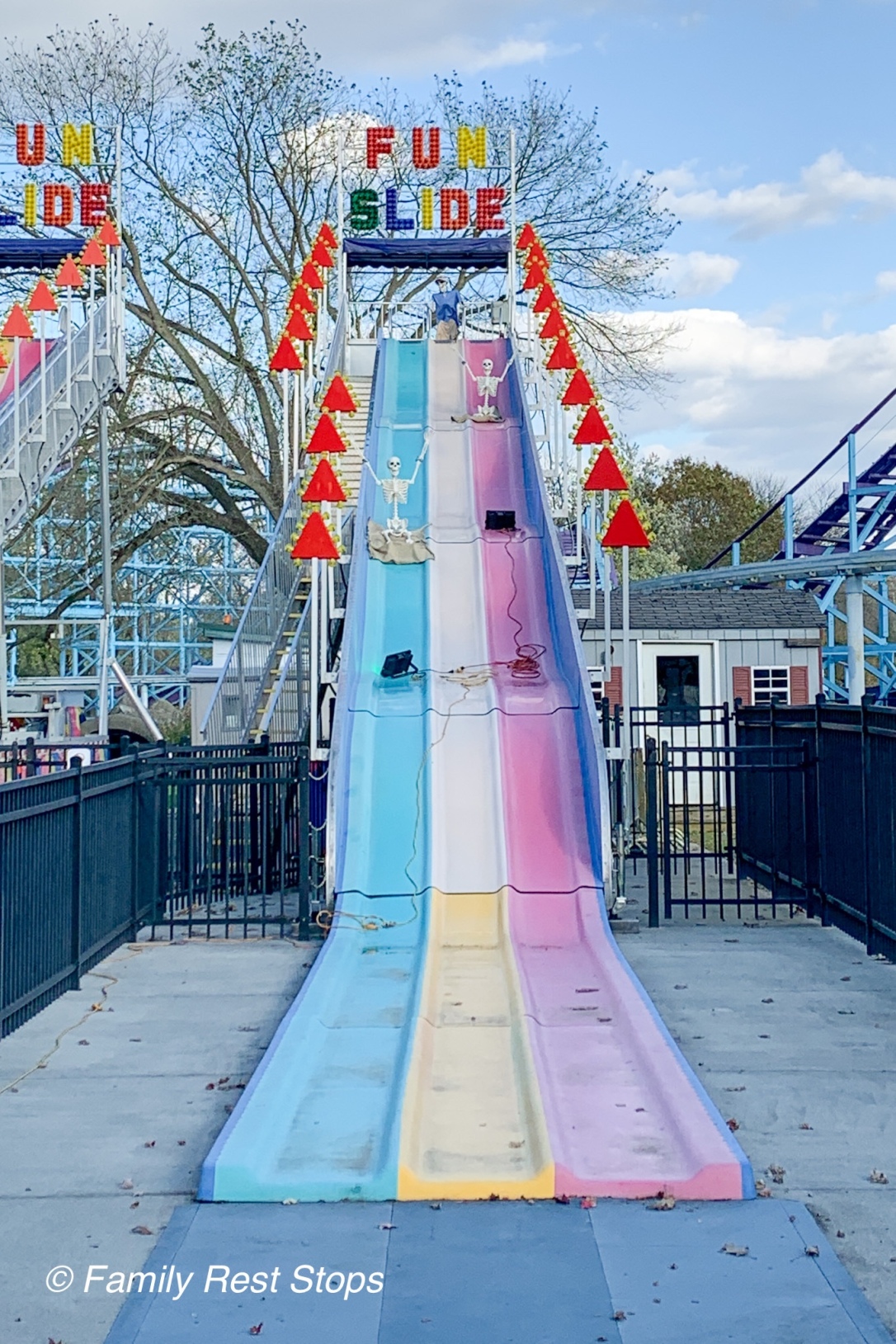 Dutch Wonderland’s tag line is, “A kingdom for kids” and it really is a very super kid-friendly park. There are a variety of rides that are great for small kids all the way up to teens. They have shows, although the ever-popular dive show is closed for Halloween if its cold out. They even have one bathroom that has a “tiny toilet” as Elias likes to call it. The only minor complaint I would have is that the number of toilets in each bathroom may be lacking on days that the park is very busy. Other than that, there really isn’t much I can say that isn’t positive about the park. For the Halloween event, they do have some additional events added. These include a dance party and the traditional Trick or Treating with the dinosaurs. This year, we all agreed that the Trick or Treating was set up better than the previous year. They did a good job of crowd control with a clear entrance and exit so everyone was forced to go in the same direction. This is great for the kids, because they can go through with ease and aren’t trying to fight to the station where the candy is being handed out. They also had a “parent-friendly” feature, adults are given a ticket they can trade-in for a piece of candy for themselves. And, of course, Halloween costumes for the kids are encouraged. Rating: 5 out of 5

The food at Dutch Wonderland is pretty standard for theme park food. They have your typical chicken fingers, pizza, burgers, and the other theme park staples. All of them are edible but nothing to write home about. For the Halloween holiday, they did have a few small special food choices. They offered hot chocolate, with a Halloween Souvenir mug available. They also offered a make your own s’mores activity area. This was a neat idea, although a little pricey. The execution of this area was a little lacking as well as it was difficult to heat your marshmallow and get it on the chocolate before it cooled to get that melty gooey s’more experience you get at home or around a campfire. I would also say that the time we tried it, the area was a little bit crowded and since the space is smaller, it was hard to maneuver around the other guests trying to do s’mores. Rating: 3 out of 5 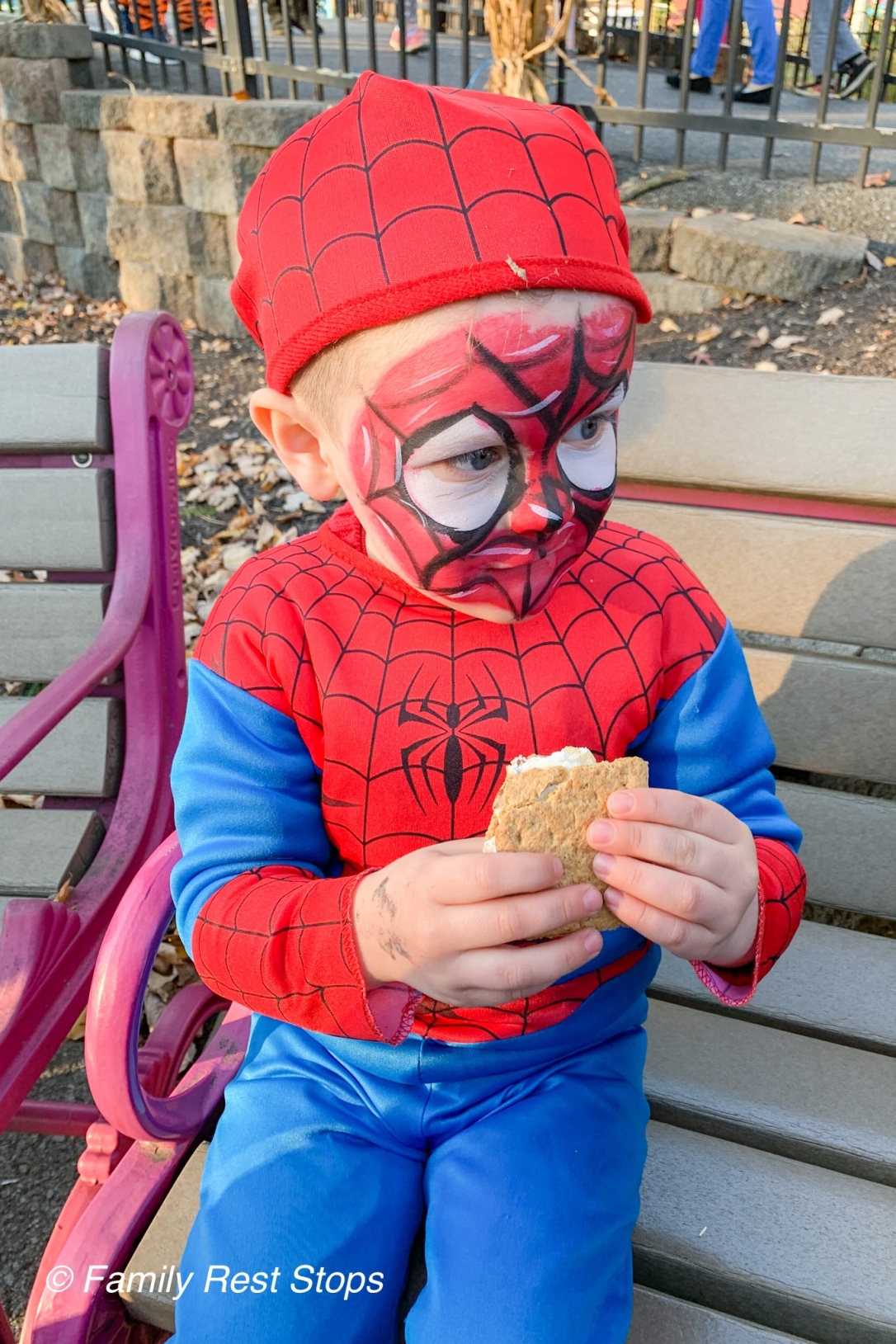 There are a lot of factors when it comes to the price value at Dutch Wonderland. Parking at the park is relatively inexpensive compared to most theme parks. It is only $5 for general parking and $15 for preferred. Admission, on the other hand, seemed a little high to me considering the circumstances. The price for the Halloween park admission at the window was $29.99 and the park was only open from 2 pm to 6 pm. This seems a little steep for a short park day. They do offer specials if you purchase your tickets online. The food is pretty much on par with the other parks where we have been to recently. Since we have a premium season pass, we get preferred parking for free and the Halloween admission is included so the cost is substantially better. If you’re a season pass holder this will not be an issue for you either. Rating: 3 out of 5

When it comes to a kid’s park, Dutch Wonderland is a hit. They do a great job all year round of keeping the kids entertained and Halloween is no exception. I know Elias has a blast every time we’re there, and he loved taking part in the holiday activities. The park takes on a great Halloween feel and really does a good job of setting the mood. Even though it may seem a little pricey to some, we find that it’s worth the expense, especially when we see the smile on our son’s face. Overall, I would say it’s definitely worth the trip. In fact, don’t just take our word for it. We know another family who drives from the other side of the state, nearly 4 hours, to take part in the festivities. That is a testament to the fun families can have at Dutch Wonderland. Overall Rating: 4 out of 5

Have you been to Dutch Wonderland’s Happy Hauntings? Share your experience with us in the comments below!

7 Must Do’s on a Carnival Cruise

19 Kid-Friendly Activities on a Carnival Cruise 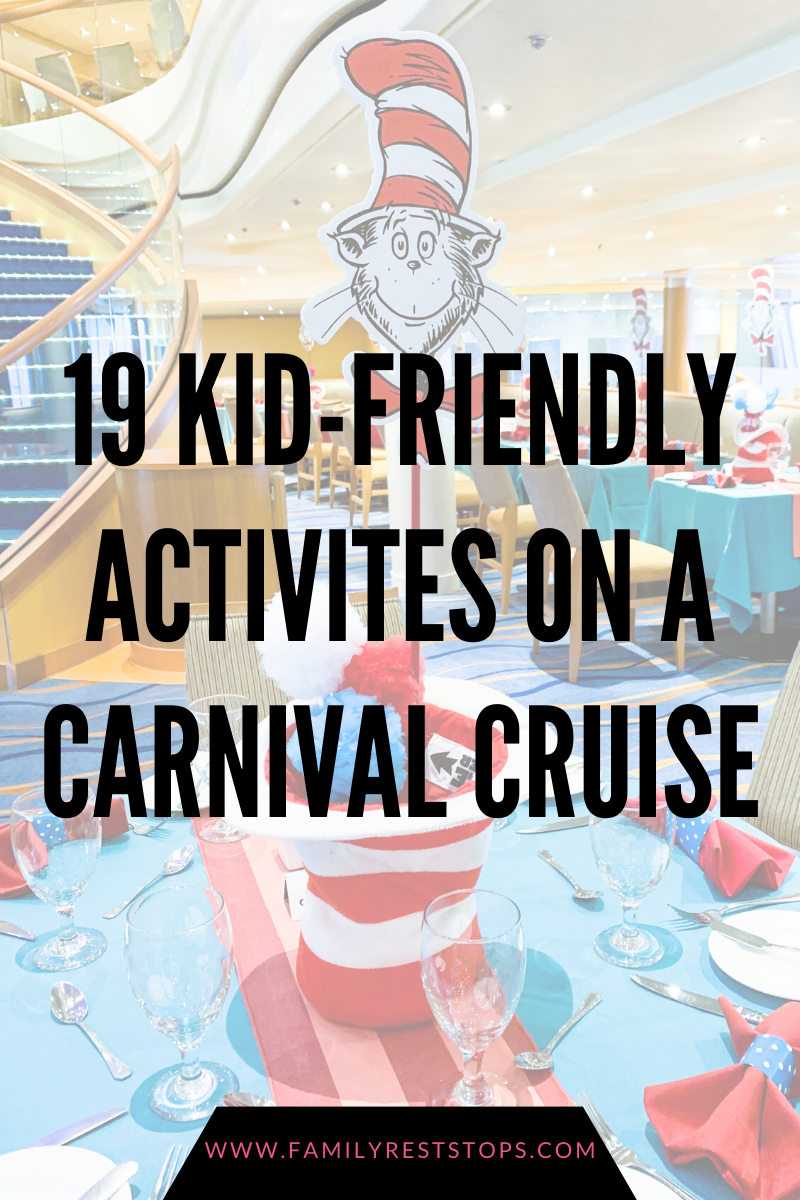 Was it Good?! A Mystical Treatsss Café Review 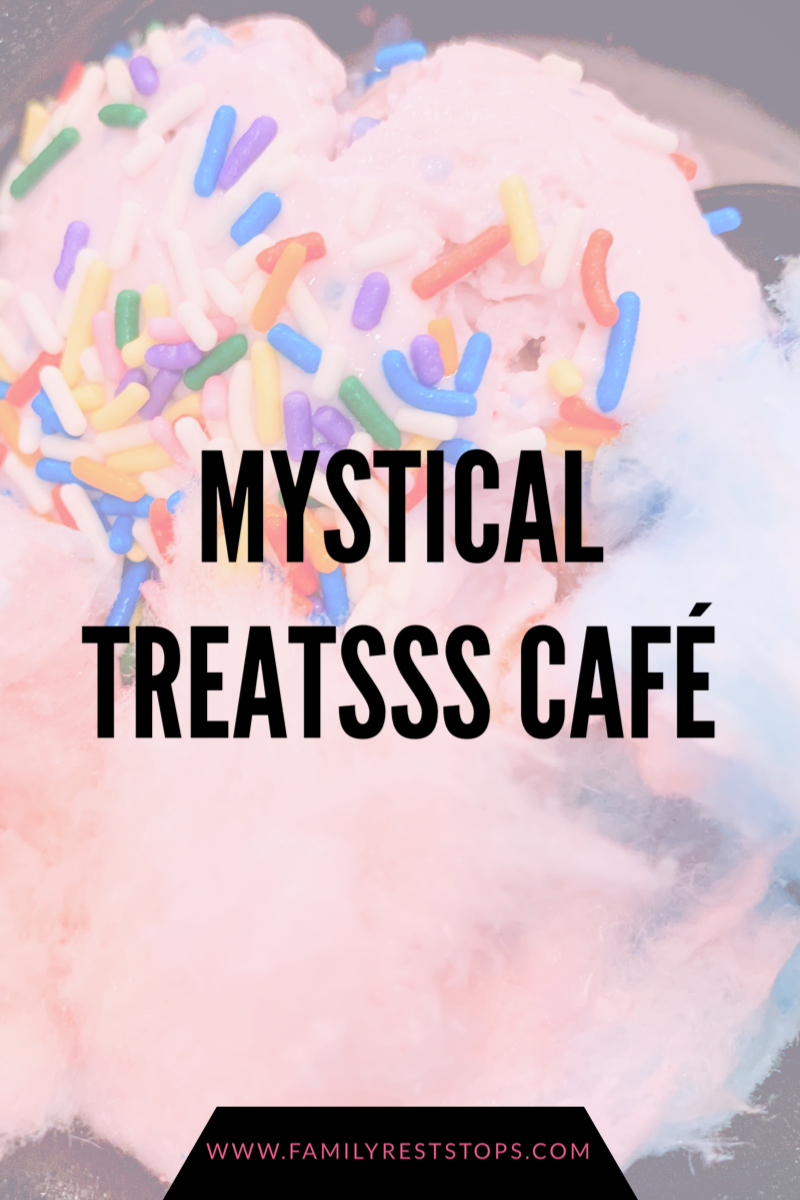 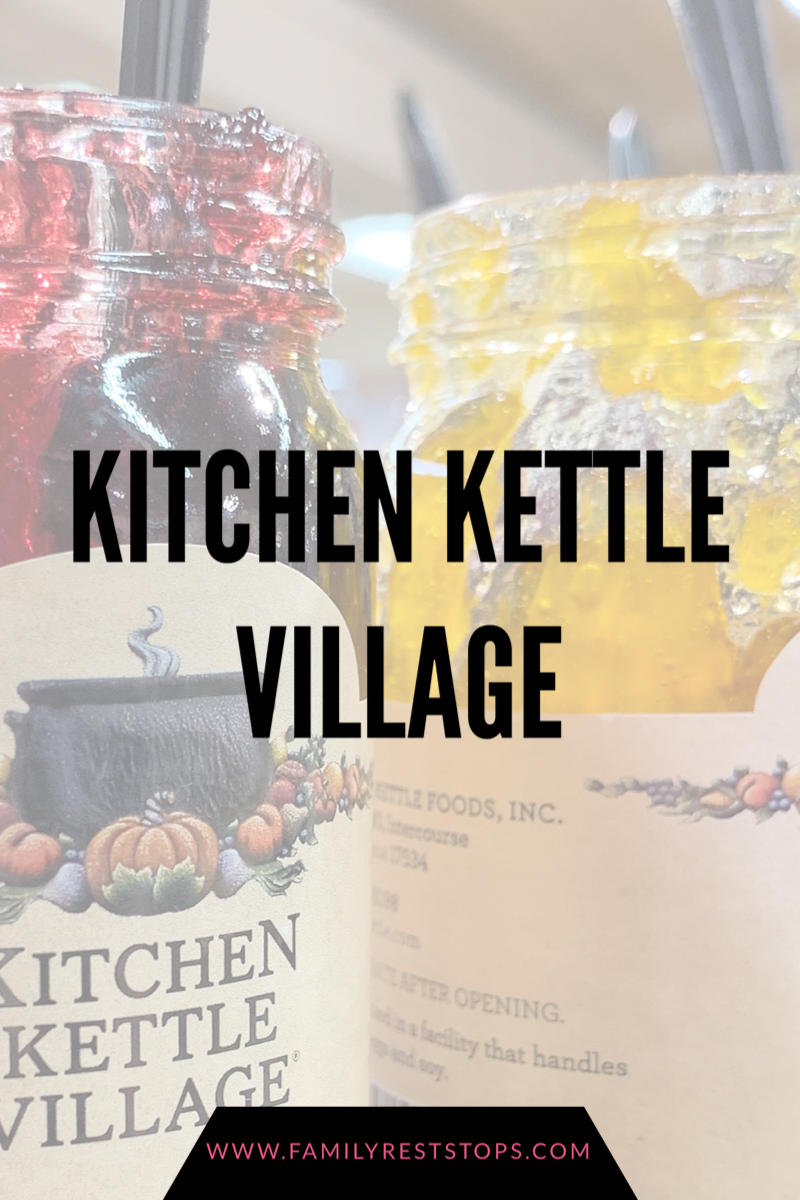 Our Most Recent Videos